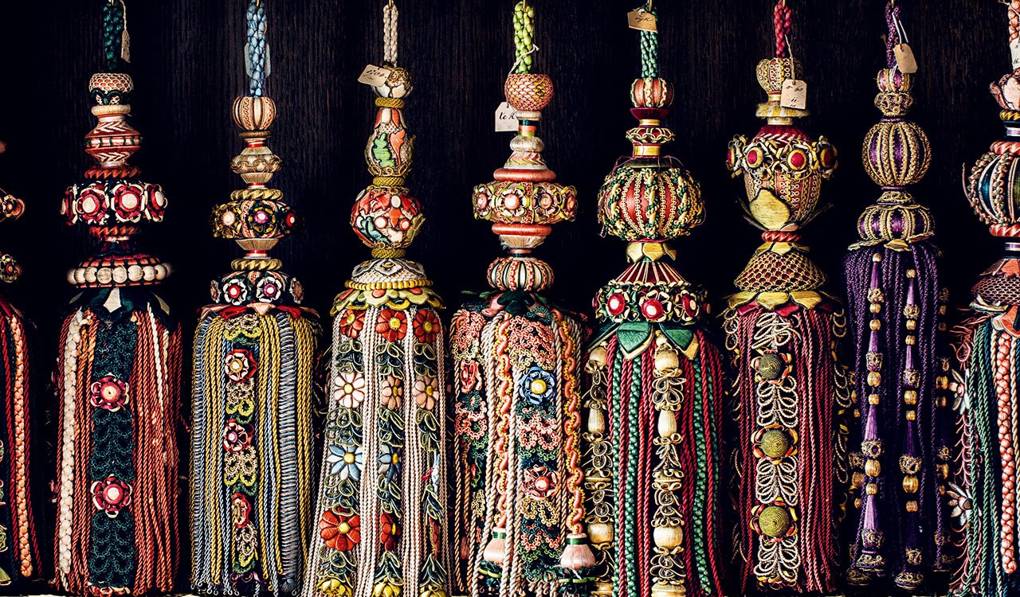 How the world’s most beautiful tassels are made

The rhythmic clickety-clack of 40 weaving machines swells as the doors open at Les Passementeries de l’île de France. They clatter and clash until the clock strikes 12 when, as if by magic, silence falls as the workers break for lunch. Throughout the day, 2,000 metres of braid and fringe pour from the looms in reams of kaleidoscopic colour, while tassels are twisted, pom-poms are fluffed and flowers are knotted by hand.

The tradition of passementerie in the village of Belloy-en-France, north of Paris, dates back to the nineteenth century, but since the Fifties, in France alone, more than 200 passementiers have closed their doors permanently or relocated to Tunisia and China, where both labour and rental prices are tantalisingly cheap. Les Passementeries de l’île de France is one of the last workshops still operating in the country today.

In 1926, Georges Doudoux, the great-grandfather of the current MD, took over the workshop in Belloy-en-France. His son later took on the business, leaving it to his daughter Marie-Claude and her husband Robert Oberti, a butcher of Italian origin who gave up a life in charcuterie to take on the tassel trade. Today, the company is presided over by the fourth generation of that family, with Jean-Christophe Oberti at the helm. He employs 25 people, some of whose parents and grandparents worked there before them.

The company’s willingness to move with the tide of technology goes some way towards explaining its longevity. Machines have been adapted or invented to ensure maximum efficiency. The exact nature of this tinkering is kept firmly under wraps, but should you require 100 metres of bullion fringing dyed to match your crimson coat, ‘you can be sure that it will arrive within the week’, says Jean-Christophe.

This is a meticulous and demanding craft that requires the workers to speak the same language as the machines, and though some necessary concessions to modernity have been made, on the whole the techniques for producing passementerie remain unchanged. Each design is hand-drawn by Jean-Christophe’s brother Yves. Meanwhile, on the upper level of the factory, workers painstakingly thread yarn around the wooden tassel tops, ensuring no single piece overlaps, lengths of fringing are cut by hand and measured by eye, and small silk embellishments are carefully fashioned into shape. On the floor below, the cord maker slowly paces back and forth to produce gimp lines.

It is the quality of the craftsmanship that sets Les Passementeries de l’île de France apart. Just like its inventions, the company’s client list is a closely guarded secret, though Jean-Christophe reveals that examples of its work hang in Britain’s Royal Households, the Ritz Paris and Luxembourg’s Grand Ducal Palace.

For the past 30 years, the company has nurtured a relationship with the London-based fabric house Turnell & Gigon, creating bespoke pieces to meet its exacting specifications. ‘Thankfully, having moved on from the bland Noughties, we are seeing significant increases in our trimming sales year on year – especially bespoke styles and colourings, with clients wanting chunkier bullions and statement tie-backs,’ says Matt Gomez, managing director of Turnell & Gigon. These are requirements that Les Passementeries de l’île de France is able to meet in the blink of an eye.

Vital components for those statement tie-backs are the wooden tassel tops, cones, barrels and balls that are produced in the same workshop that Yves and Jean-Christophe’s grandfather used, and although the yarn is dyed elsewhere in the country, every other element is made in Belloy-en-France. ‘These are 100 per cent French trimmings,’ says Jean-Christophe.

It is heartening to see this level of rare specialisation and skilled craftsmanship continues to exist 200 years after it first emerged in this small village in northern France. The pieces produced by Les Passementeries de l’île de France are so beautifully intricate, they could well be part of a museum collection – indeed, the company has its own impressive archive. However, it would be a great sadness to only see passementerie preserved behind glass in gallery display cases. But with the Oberti family leading the charge, there is hope yet that the extraordinary art of passementerie will continue to flourish.